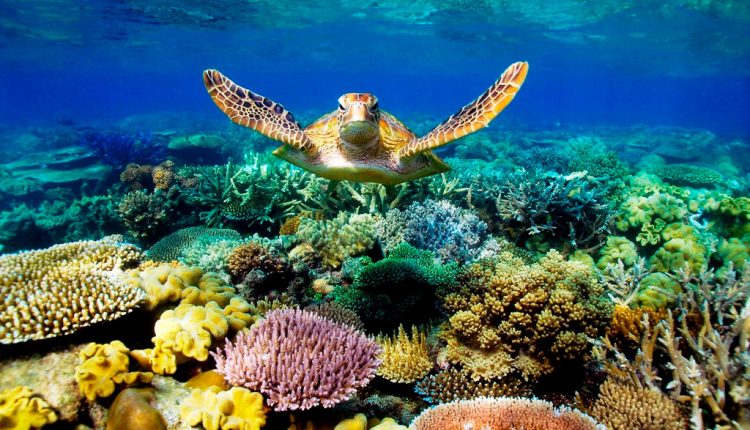 One of the true natural wonders of the world, the Great Barrier Reef is the longest reef of its kind on Earth. Home to a spectacular diversity of animal and plant life, recent legislation has granted even greater protection for this abundant natural habitat.

The Great Barrier Reef is so extensive that its precise size has never been recorded, although it is estimated that it stretches for 1,400 miles (2.250 km), and covers around 135,000 sq miles (350,000 sq km) – about the same surface area as Ireland. It is made up of 2,000 individual reels, and around 71 coral islands are spread along its length.

In broad terms, the Great Harrier Reef can be said to be divided into two regions the inner reef, known as the Great Shallow, and the outer reef, consisting of deeper reef systems and sloping walls leading to the open sea beyond. The reef itself is made up of over 100 species of coral, and supports around 1,500 species of fish. Approximately 4,000 species of mollusks inhabit the Hats and nooks and crannies of the reef, while 23 species of marine mammals may be encountered along the vast length of this complex ecosystem.

Certain areas of the Great Barrier Reel have enjoyed protected status since 1973, when it was established as a marine park. This was enhanced in 1981 when the reef was recognized as a World Heritage Site. More recent legislation has seen 71 percent of the total area of the reel covered by some sort of protective status-an optimistic sign for the future of a reef that is larger than any other coral system, but just as vulnerable to misuse and exploitation.

Diving in the Region

There is a mass market for diving the Great Harrier Reef, operating out of Cairns and Townsville in day boats containing very large numbers of divers. There have been a number of well-publicized incidents where divers have been missed when boats have departed back to shore, and although this is now very well regulated, it is still worth, on the larger vessels at least, ensuring that the correct procedures are in place before diving The other main diving activity on the reef takes place from liveaboards that venture farther afield to more remote sites.

Divers on the reef are assured of reasonable hard coral and colorful fish life almost anywhere along its length, but there are also a number of notable individual sites. Ribbon Reef Number 10 is particularly rich and diverse, even by the Great Barrier Reef’s high standards, and is the location for dive sites such as Cod Hole-famous for encounters with giant potato cod-and Pixie’s Pinnacle, renowned for its diversity of large animal encounters.

Why Scuba Diving is So Popular at the Great Barrier Reef