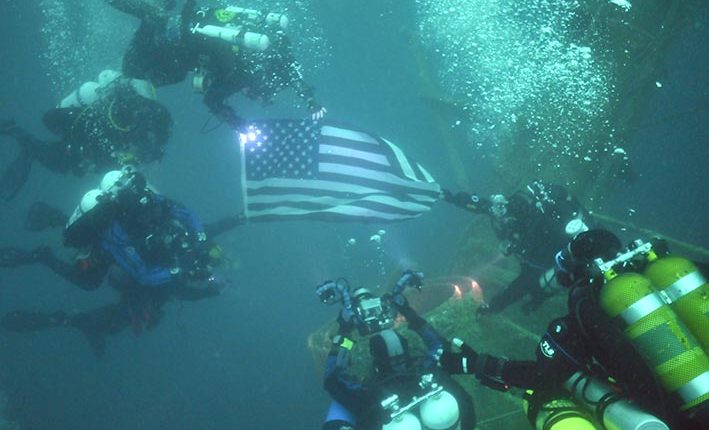 Koh Tang today is mostly forgotten as the last battleground of the Vietnam War. Located in the Gulf of Thailand it is 35 miles from the port of Sihanoukville Cambodia. There are no memorials here, once I heard the distinctive sound of a AK47 ripping through a clip poking holes in the sky fired in anger over a poker gamer, sometimes today you can still hear explosions, but they are related more to poverty than to war, as desperate men risk their lives in a continuing battle to make money from a slowly decaying fishing ground that is systematically being depleted by the Vietnamese and Thailand fishing fleets, illegally fishing in Cambodian water for squid and shrimp mostly. Thankfully the dynamite blasts are down to a trickle as the Cambodians are discouraging this at the higher levels and it is starting to be really enforced.

Underwater there are no visible artifacts or evidence that the battle ground was here. The USA MIA teams are still looking for a helicopter lost and never recovered during the Mayaguez incident, but many here speculate that it was found a long time ago, and like the other submerged wrecks in this part of South East Asia was salvaged for the metals that they are composed of. The iconic helicopter of the Vietnam War nicknamed “Heuys” I have been told are mostly aluminum, magnesium and titanium which would bring a handsome reward to the salvager.

Koh Tang today is one of the best scuba diving areas in Cambodia with several Sihanoukville dive companies running overnight trips out to this large uninhabited island group. Large fish like cobias and sail fish as well as large schools of jacks, snappers and fusiliers swim over the reef in large numbers as damaged reef section are repaired by mother nature, with new coral colonies of “apcora” (a commonly known variety being stag horn coral) growing at a rapid pace, and the fish stocks displaced start to recover. The diving is good, no crowds and several large shallow sections, as well as the deep reefs escaped damage, so there is ample dive opportunities interspersed with the damaged coral beds. The most famous dive site in Cambodia would be Virgin Reef which has never been completely dived due to its large size, is blessed with healthy fish stocks and some amazing coral gardens stretching for hundreds of meters out from the island.

Scuba Diving Do’s and Don’ts (You Might Have Overlooked)

Wetsuit For Kids – The Benefits Of Wetsuits For Kids