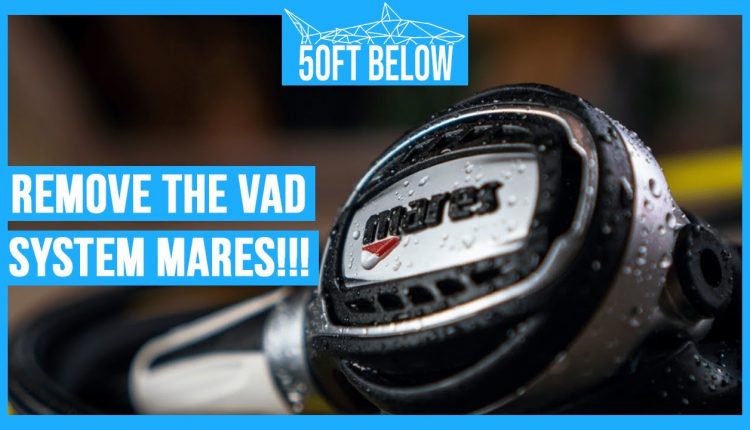 The Mares Fusion 52x is the flagship regulator of Mares and is a great regulator. That is as long you keep the VAD system in minus mode! The VAD system doesn’t add anything to the regulator and in our opinion it makes it unnecessary expensive!

The Mares Fusion 52x on Amazon:

Help us save a shark and buy awesome 50ft below shark merch:

With the Fusion 52x Mares wants to establish itself in the high-end regulator market next to the Apeks XTX200 and Atomics T3. The price tag of $ 719.95 on Amazon puts it right up with other high-end regulators but does the performance justifies this price tag?

When you see the Mares Fusion 52x for the first time you will be stunned by it looks. The regulator simply looks beautiful. The matte finish on the second stage really gives it class without it being a blingy shiny regulator. The design looks bulletproof and you can feel the effort Mares has put in to make this a quality regulator set. There are no excess buttons on the second stage except for the VAD system next to the hose. All this combines to a sleek looking regulator which by looks can compete with the best.

The 52x first stage is a variation on the MR52 which Mares used with other regulators in the past. Thanks to the new design of the valve and seat Mares reports a boost in reliability of 600%. We haven’t had any problems with our testing model but we only dived with it for around 20 dives. Browsing the internet for long time user we couldn’t find any complaints about failing fusion regulators. This is a major upgrade from the older models which are notorious among cold water divers.

The 52x features two DFC (Dynamic Flow Control) low pressure ports, this system prevents the drop in pressure during inhalation. Because of heavy European regulations which demand a high preforming alternative second stage, Mares has fitted the second port for the alternative air. The strange nipple which where in earlier version of the DFC ports are gone. You can now use normal hoses with DFC ports. Besides the two DFC ports you get two normal low pressure ports on the other side and two high pressure ports.

The thing which sets the Fusion apart from other regulators found in the second stage. Where the hose meets the body of the second stage you will find a VAD switch with a + and – sign on it. The VAD is also the only button or switch on the second stage. No venturi switch, the Fusion does this by itself and no other air resistance switch either. The massive purge button on the front tilts backwards from the top and also results in a massive burst of air. The stage only weighs in 11oz/327gr and doesn’t feel to heavy in the mouth. The exhaust valves are place under such an angle that the bubbles will go past your face instead of in front off.

Taking the Fusion for a spin is a joy. The breath resistance is minimal and the regulator feels natural in your mouth. When you turn the VAD to plus mode you will get an extra burst of air every time you inhale. For me and several other instructors who have tried the Fusion for us this was to much. Especially when you have the plus mode on when you’re on the surface. It somehow feels like to much air and it feels like your getting inflated. This get’s slightly better when you dive deeper and deeper but to our liking it was still to much. Another problem is that when you finish your dive and exit the water the VAD might still be in + mode. The regulator really easily purges itself then which results in a loud and massive release of air.

A great thing about the Fusion is the fact that the performance is great in minus mode and it stays that way no matter how deep you go. The purge button is easy to reach and use even if you are wearing gloves. The amount of air released after pressing it is sufficient and not too much for our liking.

Is the Mares Fusion 52x Worth a Buy?

The Fusion is a great regulator which performs outstandingly in cold water and warm water alike. The reliability is mostly fixed with the X update of the MR52 first stage and you’ll get an regulator which you can trust. On the other side the VAD system is in our few an unnecessarily expensive addition. The Fusion would have been great without it and possibly cheaper.