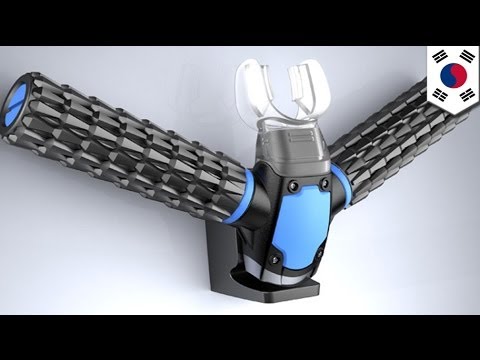 South Korean designer Jeabyun Yeon claims to have invented an oxygen mask which can draw air from water as you swim, allowing users to breathe underwater without oxygen tanks.
Called Triton, the mask is a mouthpiece respirator that allows users to breathe underwater by simply biting on the mouthpiece, which eliminates the need to inhale or exhale.

According to reports, the mask’s two arms act like the gills of a fish.

The water is first sucked in by the arms. The oxygen is then extracted by a filter with fine threads and with holes smaller than water molecules.

The excess fluid is then released while the oxygen is stored using a micro compressor inside a small tank.

The compressor is powered by a micro battery that is supposedly 30 times smaller than its contemporaries, but charges a thousand times faster.

Yeon himself describes it as “a future product”, not yet available in stores, that could change people’s approach to water.

Welcome to TomoNews, where we animate the most entertaining news on the internets. Come here for an animated look at viral headlines, US news, celebrity gossip, salacious scandals, dumb criminals and much more!

Subscribe now for daily news animations that will knock your socks off.