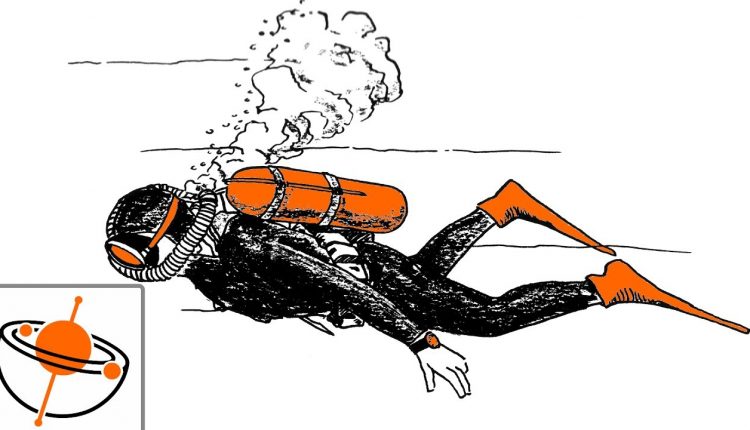 The Science of Breathing Underwater

Out of the Skies, Under the Earth by Chris Zabriskie is licensed under a Creative Commons Attribution license (
Source:
Artist:

Air is composed primarily of nitrogen. There’s also healthy dose of oxygen, and approximately 1% is other gasses.
This gas mixture works great for humans when they are on land, and the atmospheric pressure isn’t too high or low. But when scuba diving, especially deep diving, regular old atmospheric air doesn’t work so well.
You see, as you dive deeper and deeper, the ambient pressure around you starts to increase considerably. And, as you breathe from the scuba equipment, your lungs automatically equalize and become more pressurized to match its surroundings.
But the increased pressure in your lungs can force nitrogen to dissolve into your bloodstream. This is why divers have to surface so slowly. The nitrogen needs to leave body’s tissues and bloodstream in a slow controlled manner.
If a diver tries to surface too quickly, the dissolved nitrogen comes out of solution inside the body in the form of bubbles. These nitrogen bubbles can cause many symptoms; most commonly joint pain and itchy rashsy skin. This is known as Decompression Sickness, or The Bends, and in severe cases it can lead to paralysis or even death.
So, in order to reduce the risk of Decompression Sickness, the air that divers breathe can be replaced with a slightly altered gas mix known as nitrox.
To create this nitrogen and oxygen blend, and a good chunk of the nitrogen is replaced with additional oxygen. Because there is less nitrogen in this mixture, it is able to reduce nitrogen uptake in the body’s tissues.
However, this tactic only works for relatively shallow diving. If one continues to dive deeper, below 30 meters or so, we run into another problem.
At 50 meters, the ambient pressure is about 5 times as great as surface pressure. This means that the lungs would contain approximately five times as many nitrogen and oxygen molecules as they normally would.
Breathing atmospheric air at this depth can lead to Nitrogen Narcosis, which impairs cognitive function, and is similar to that of inhaling nitrous oxide.
Replacing the nitrogen with oxygen, as in the case of nitrox, doesn’t really help either, because, instead of nitrogen narcosis, the extra oxygen can lead to oxygen toxicity; which effects the central nervous system with side effects such as twitching, altered vision, and nausea.
To combat this, both the nitrogen and oxygen must be reduced and replaced with an inert gas, such as helium, which has very little, if any, narcotic effect.
This three gas blend is known as Trimix.
For even deeper dives, the Trimix recipe can be altered by having less nitrogen and oxygen and even more helium.
The nitrogen can even be eliminated altogether, creating a mix known as Heliox. But for especially deep dives, breathing this much Helium presents a new problem: HPNS or high pressure nervous syndrome.
This disorder is still not fully understood, but it has been found that including another gas in the mixture, such as the nitrogen in Trimix, suppresses the effects of HPNS.
The only problem with using Trimix at this depth is that, at this extreme pressure, molecular nitrogen and oxygen, which are somewhat heavier than the helium, become hard to breathe.
Although the oxygen can’t be gotten rid of completely, the nitrogen can be replaced with hydrogen, the lightest element, which is much easier to breathe. This blend is known as Hydreliox.
Even the helium can also be replaced with hydrogen, creating a mixture known as Hydrox.
Both of these blends are used for extremely deep dives, and have been tested to simulated depths in excess of 700 meters.
Although this video has covered a good portion of the breathing gas mixtures utilized by divers, there are still more exotic breathing gasses that were not covered. Regardless, I hope you’ve learned exactly why deep divers can’t rely on atmospheric air alone.